Performance analytics firm called Primate Labs has tested Apple’s iPad Air and estimated that this device is about 90% faster than its predecessor iPad 4.

The Apple A7 processor, which can be found inside of the new tablet, is similar to the chip used in the iPhone 5s, but in fact, it is 100MHz faster. 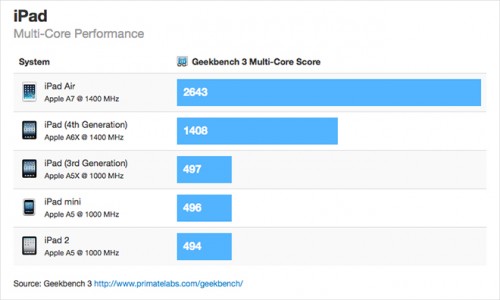 Apple's newest iPad trounces its predecessors by a hefty margin, beating last year's fourth-generation iPad by some 87 percent in the multi-core benchmark. This is near Apple's claim that its A7 SoC offers up to twice the performance compared to last year's A6X.

iPad Air will hit the U.S. stores this week - on Friday. By the end of the year it is expected to become available worldwide.