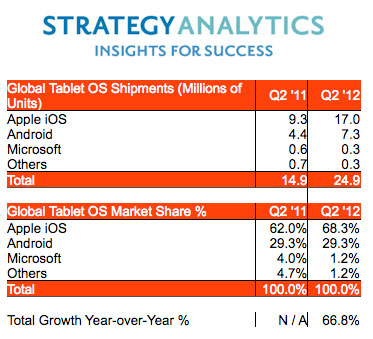 Apple announced that 17 million iPads were sold during the second calendar quarter of 2012. A research firm Strategy Analytics claims that Apple captured 68.3% of the global tablet market comparing with 62% in the year-ago quarter. That is the company's highest share in nearly two years.

Apple shipped a robust 17.0 million iPads worldwide and maintained its strong market leadership with 68 percent share during the second quarter of 2012. Apple continued to shrug off the much-hyped threat from Android and the iPad’s global tablet share is at its highest level since Q3 2010. [...]

Despite high expectations for companies like Amazon, Samsung, Acer and Asus, the Android community has yet to make a serious dent in Apple’s dominance of the tablet market. Unspectacular hardware designs, limited uptake of cellular models and a modest number of tablet-optimized services have been among some of the main reasons for Android’s mixed performance so far.

Google's Android platform market growth was 66.8%, enabling it to hold steady with 29.3% of the market. But with rumors of an "iPad mini" coming later this year, Apple could further solidify its leadership position by competing more closely on price with some of the recent Android tablets.