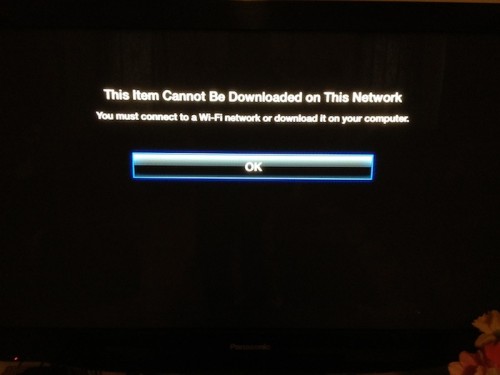 Yesterday Apple confirmed an ongoing error with iTunes in the Cloud. Some customers claimed that they are unable to download and stream content.

TheNextWeb's Matthew Panzarino contacted Apple Support to discuss a "this item cannot be downloaded on this network" error message that he and other users had been receiving on the Apple TV. The message directs users to do either "connect to a Wi-Fi network or download it" on their computers.

"The support person said that the problem, as far as they know, has to do with the iTunes cloud or its servers and that there was currently no ETA for a fix," the report read.

Several users also reached out Apple Support to ask them about the issue but they also didn’t receive a solution to the problem.

"I just spoke with Apple Support, they are currently having a problem, they don't know what is causing it," wrote user 'bdb0311'. "It seems to be on all platforms and the problem only occurs when your try to download anything over 15mb. They do not have a ETA yet for when this problems gets resolve."