According to the latest report from Gartner, Mac shipments declined 13.4% in the last quarter. Apple managed to sell only 4.9 million Mac units that accounted for the market share of 7.2%. As to the global computer market, it is experiencing problems as well. PC shipments in Q3 2016 reached 68.9 million, which is a decline of 5.7% year-over-year. 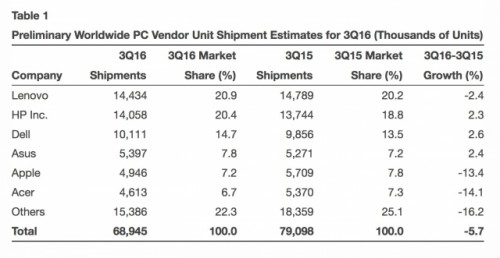 The main reason for poor Mac sales is the lack of new models in the lineup. Apple is expected to release an updated MacBook Pro with new OLED touch panel, USB-C and other improvements later this year. This device may lure new customers and help the company to improve overall Mac sales. Apple hasn’t yet commented on the rumors about the MacBook update, but many sources claim new models are just around the corner.