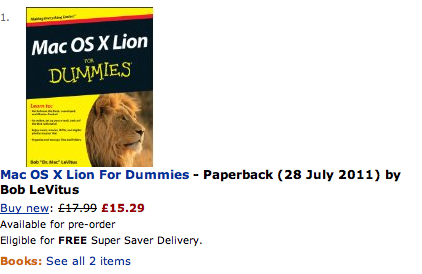 The  Amazon UK website placed several manuals for the upcoming Mac OS X 10.7 Lion  that will be released late in July. That fact might suggest that the operating system will also launch around that time. It seems that the OS will be released right after WWDC, this year expected to be from July 5 to July 9. The cover of one of the Mac OS X Lion manuals makes reference to the already announced Launchpad and Mission Control features but also references the dock, most of which was demonstrated last year at the Lion announcement. Noteworthy to say that the release date of these guidebooks is a good indication of product launches. For example, Amazon information predicted the release date Microsoft Office 2011 for Mac.