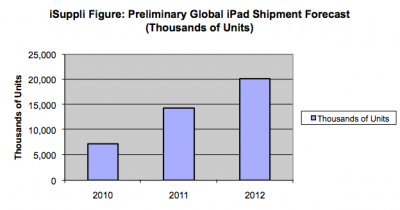 "Touch is the new standard for user interfaces, providing a naturally intuitive way of operating an electronic device, whether you are two or 92. The tablet form factor is ideally suited to touch. The iPad represents an intriguing mix of two devices that have struggled to gain traction for years: Internet appliances and tablet PCs".

Alexander also thinks that limitations of the device are compensated with a huge number of easy and intuitive apps and the latter will define whether the iPad hardware will be overlooked for upgrade. The report says that falling number of sales can also make company to change their strategy.

It is noticeable, that the numbers given by the research are higher than any other - for example the WSJ said the sales will be between 1 and 5 million dollars in the first year. Analyst at Piper Jaffray Gene Munster believes the iPad sales to reach 2.7 million in 2010.