New Schematics Show that Next-Gen iPhone Will Be Slightly Thicker

According to the latest images showing leaked schematics for the next-generation iPhone, the handset will get the same design as its predecessor. However, the device may become a bit thicker due to new hardware components, Chinese insiders claim. The schematics that are available below have been first spotted on the Japanese version of , that is why I think we can believe what we see. 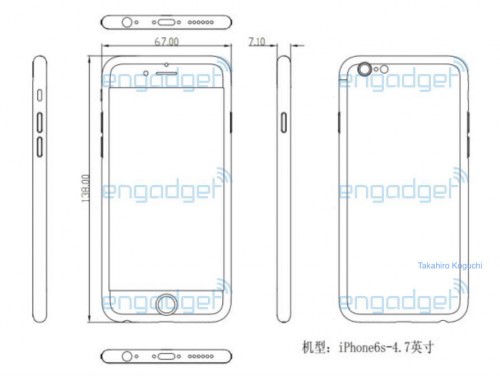 As noted by the reporters, the next-generation iPhone dubbed iPhone 6s will get the thickness of 7.1mm. If to compare this number to the thickness of the iPhone 6, which is 6.9mm, we may see a slight difference caused probably by the inclusion of Force Touch display.

A leaked schematic of the iPhone 6s allegedly reveals that the next generation smartphone will be slightly thicker than the iPhone 6.

It was previously rumored that the iPhone 6s will be slightly thicker to accommodate a new Force Touch feature for the display.

Apart from the support of Force Touch, the next-gen iPhone will feature a new processor, a logic board with more efficient chips, a 12-megapixel camera, 2GB of RAM and a new rose gold color option.