Ming-Chi Kuo of KGI Securities has released another report; it contains some predictions that deal with Apple’s iPad media event, which is set for October 22nd. The analyst is famous for his precise predictions, so you’d better read what he expects from the company from Cupertino (via ): 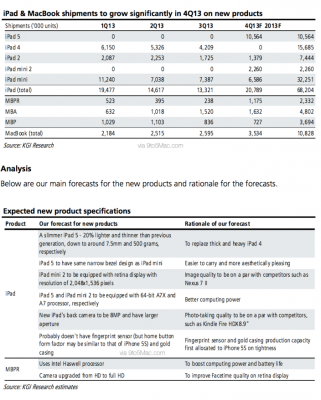 Kuo says the iPad 5 will be 20% lighter and thinner than the previous generation bringing it to around 7.5mm in thickness and 500 grams in weight. It will have the same narrow side bezel design as the iPad mini and be equipped with a 64-bit A7X processor. The tablet will also get a 8MP back camera with a larger aperture.

The iPad mini 2 is said to gain a Retina Display at a resolution of 2048x1536. It will be equipped with an A7 processor.

Neither iPad is said to come in the gold color or with a fingerprint scanner.