USA Today claimed on Thursday that iOS 7 is the "most troubled" if to compare it with older versions of the Apple’s mobile operating system. However, the journalists were unable to provide at least one expert's conclusion or independent testing result, so looks like such an article was aimed only to draw some attention from the newspaper readers, that’s all. 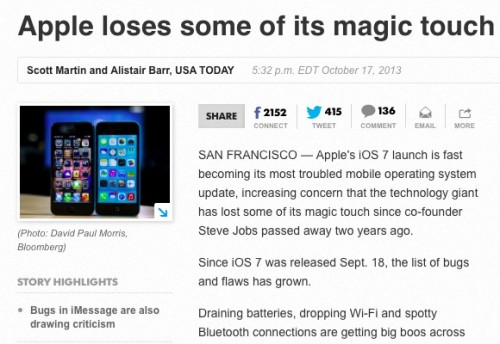 The report by Scott Martin and Alistair Barr, writing for USA Today, described Apple's iOS 7 as "fast becoming its most troubled mobile operating system update," under a headline "Apple loses some of its magic touch with iOS 7."

The report alluded to reports of a "list of bugs and flaws" in the company's support discussion boards, but made no attempt to quantify or qualify the scope and severity any of those issues.

Apple’s iOS 7 was released in September and reportedly contained some bugs. Nevertheless, most of them are either already fixed, or will be removed in the next software update.