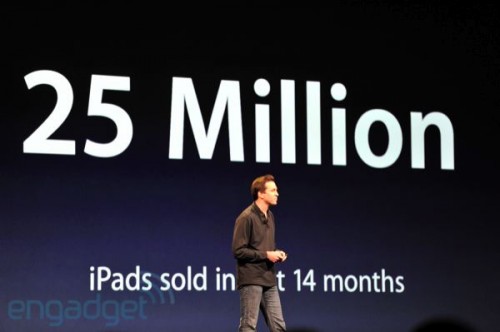 In just 14 months, Apple has sold over 25 million iPads. So now the total number of devices (iPhone, iPad and iPod Touch) running iOS had reached 200 million since the original iPhone launched in 2007. Apple’s iOS has got the first place among mobile software with 44% of the total market (Android took 28% of the market and RIM - 19%).

Our customers couldn’t wait to get their hands on the iPad 2. In the first 14 months, we’ve sold 25 million iPads

Over 15 billion songs were sold through the iTunes store. The iBookstore has over 130, 000 downloads. Apple now has 225 million accounts aggregated from the iTunes, iBooks and App Stores. Over 14 billion downloads were made from the App Store, so developers received over $ 2,5 billion dollars since 2008 when the App Store was launched.