A hacker group called Pangu has just released an untethered jailbreak of iOS 9.1. It’s available for both Windows and Mac users. As you know, iOS 9.1 was released in October, so it’s actually high time someone hacked this version of Apple’s mobile operating system. 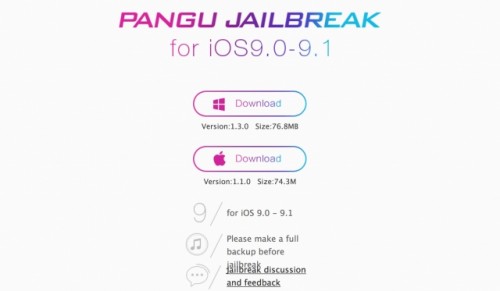 There has been a lot of rumors about Pangu’s intentions to make a jailbreak of iOS 9.3. It’s rather strange that the hackers decided to release the one for the previous version of iOS.

Earlier this year, Luca Todesco said that he’s already made a jailbreak of the fifth beta of the iOS 9.3, but he doesn’t want to make it available for the public use right now.

Apple will officially release iOS 9.3 at the end of the March, so it’s possible that the jailbreak of this version will be unveiled shortly after this.

As to iOS 9.1 jailbreak, it is available on Pangu’s official website. If you have iOS 9.1 installed on your device, you can try downloading the updated Pangu utility right now.