« NPD: Apple Increased Its Music Market Share
iPad and Velcro - The Symbiosis Of Simplicity And Convenience »

AdMob: iPhone is The Most Popular Smartphone Worldwide 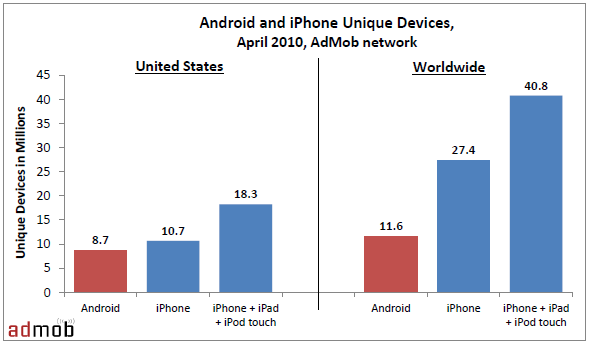 Recently AdMob revealed a new metrics report that studied the numbers of iPhone OS and Adroid devices throughout the world. The company emphasized it was looking only at the devices that were at least once connected to the AdMob network:

"These unique device numbers are from the AdMob network only and reflect the adoption of our products and business operation. We don’t know what percentage of the total universe of iPhone and Android devices AdMob reaches. However we believe the data is useful on a relative basis given the large sample size of devices in our network."

So here are the main facts and conclusions along with figures:

« NPD: Apple Increased Its Music Market Share
iPad and Velcro - The Symbiosis Of Simplicity And Convenience »