According to the data shared by App Annie, Google Play saw a massive growth in the number of downloads in 2015 that allowed the store to double the number of App Store downloads. Still, Apple’s online marketplace dominated in the revenue generated by the purchases of applications. 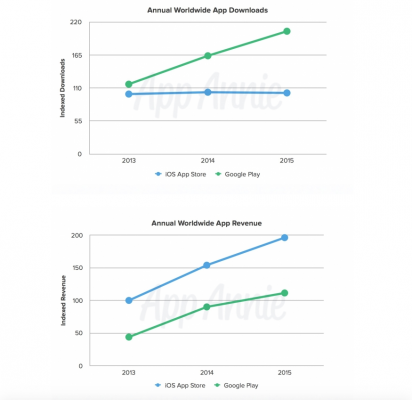 Users from emerging markets including Brazil, India, Indonesia, Turkey and Mexico let Google overtake Apple. However, thanks to people from China, the United States of America and Japan, who spend money on iPhone and iPad apps, Apple managed to beat its rival in the amount of revenue generated by the sales of apps and in-app purchases.

Both stores had significant gains in revenue; however, iOS continues to outpace Google Play. The App Store saw strong revenue growth driven by China, the United States, and Japan, which contributed nearly 90% of the App Store's year-on-year growth.

In 2016, the number of app downloads on Google Play and App Store is expected to grow even further. Apart from that, the experts believe the revenue generated by the purchases of applications will increase as well.