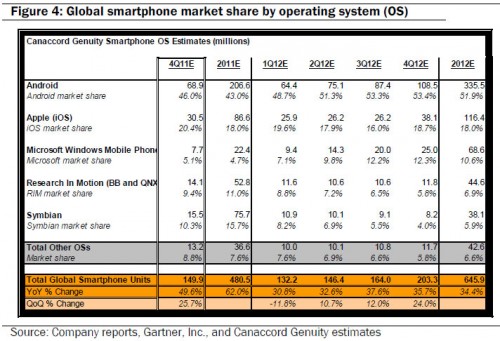 Analyst Michael Walkley with Canaccord Genuity expects that combined iPhone and iPad sales in calendar 2012 to reach more than 170 million in another record breaking 12-month span. He sees 2012 being another banner year for Apple, with sales of 116.4 million iPhones and 54.6 million iPads. Walkley believes that iOS mobile operating system share will reach 18 percent, and will take the second place behind only Google's Android with 51.9 percent on sales of 335.5 million handsets.

As for the iPad, Apple's market share to dip to 52.4 percent in 2012 on sales of 54.6 million. Walkley projects that the greatest gain in tablet market share in 2012 will have Amazon with the projected 10.3 percent growth in 2012. Now the iPad 2 is the top selling global tablet with the newly released Amazon Kindle Fire its closest competitor.