Just one day after making iOS 8.1.1 available for users worldwide, Apple on Tuesday seeded iOS 8.2 to developers for testing. What is interesting about this particular update is that it contains WatchKit SDK that allows to create apps for the Apple Watch. Apart from tools for developers, the new beta-version of Apple's mobile operating system contains several stability improvements. Well, as always. 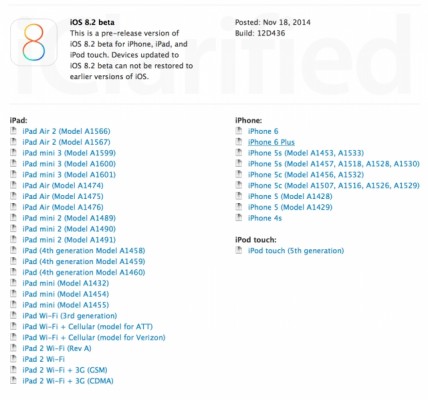 The new SDK lets Apple developers create apps and actionable notifications for the upcoming smartwatch that will be displayed on the tiny screen of the device. As noted by Apple, to control and navigate through the new apps, users will use not only the usual touch interface, but also Force Touch, Digital Crown and Taptic Engine, which were introduced with the Apple Watch back in September.

"Apple Watch is our most personal device ever, and WatchKit provides the incredible iOS developer community with the tools they need to create exciting new experiences right on your wrist," said Philip Schiller, Apple's senior vice president of Worldwide Marketing.

If you have a developer account, you can download the new iOS 8.2 beta along with WatchKit SDK and Xcode 6.2 beta right now. It is available on Apple's dev portal.