According to the latest rumors shared by reliable insiders, Apple has recently begun the construction of a store designed to sell Apple Watches in Japan. The dedicated store will be situated at Department Store in Shinjuku, Tokyo. After looking at the image below, one may think its only a temporary location aimed at advertising the recently-released wearable device, but in fact it’s not. It is listed in the mall directory, moreover, there’s a new Apple Watch ad on the mall’s website. Everything looks serious. 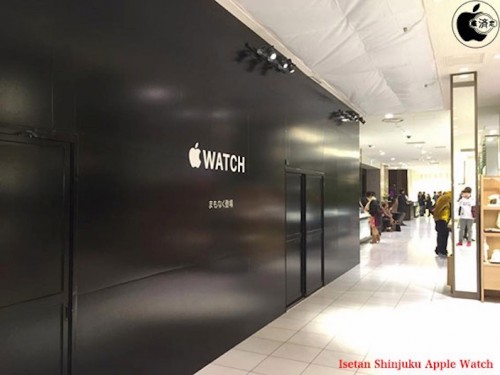 At the Isetan Department Store in Shinjuku, Tokyo, Apple is building a store specifically for the Apple Watch on the ground floor. Macotakara thinks it might be a permanent fixture because it is listed in the mall directory below.

As you probably know, Japan is one of the 9 countries, where the sales of the Apple Watch will start on April 24th. Apart from this Asian country, the smartwatch will become available for purchase in the United States of America, the United Kingdom, Australia, Canada, China, France, Germany and Hong Kong. If you wish, starting from April 10th, you can pre-order the device.