According to the latest patent filings published on Thursday by the US Patent and Trademark Office, Apple is planning to develop a new device-unlocking system. This system will allow users to unlock their iOS devices by connecting a set of illuminated dots, so that drawing a custom pattern on the screen of the device. The patent applications are entitled 'Gesture entry techniques'. There're two filings that deal with the new technology, not one, which a bit strange, I guess. 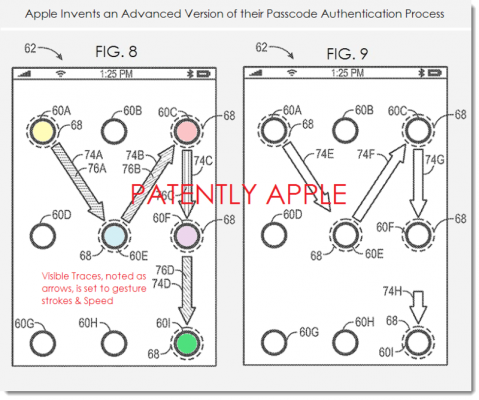 Apple filed for the patent in late 2012, several years after Google introduced a very similar feature in Android. It would appear, though, that the iPad-maker’s version of the gesture-based password is at least slightly more advanced, as it can account for swipe speed, use of invisible dots, and more.

I don't know if Apple will use the new patented technology in the next-gen iPhone and iPad, but anyway, it would be very interesting to see how everything works.