The American Department of Justice says that Apple changed its in-app purchasing policy 'to retaliate against Amazon'. As a proof it cites an email from Steve Jobs sent to several Apple’s executives, where Jobs suggests to change the purchasing rules for Amazon and a number of other companies to make them use only Apple’s native payment system. 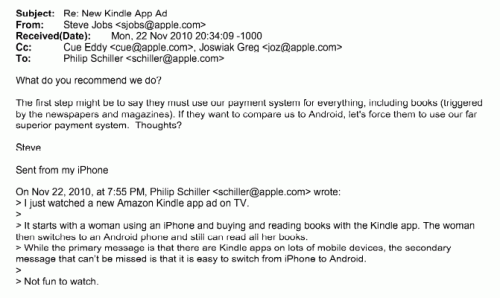 In 2011, Apple changed in-app purchase rules to require that any content sold through apps must also be sold through the iTunes Store, and forbid publishers and retailers from sending users to websites outside their apps to make purchases. As a result, Amazon removed the Kindle Store from its app and retailers like Barnes & Noble and Kobo followed suit.

The Department of Justice claims that Apple changed purchasing rules on purpose, to “make it more difficult for consumers using Apple devices to compare ebook prices among different retailers, and for consumers to purchase ebooks from other retailers on Apple’s devices.”

Taking into account all I’ve written above, Apple seems to be guilty. And what do you think?