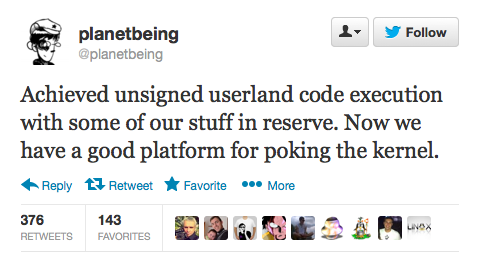 Famous hacker Planetbeing, member of Evad3rs team, posted an update regarding team's iOS 7 jailbreak progress. They've achieved one important step - unsigned userland code execution. Basically this means that they've got behind Apple's walls of security and now can poke at the kernel. Bugs found in the kernel could be used to create a jailbreak for the new operating system.

Achieved unsigned userland code execution with some of our stuff in reserve. Now we have a good platform for poking the kernel.