« Apple Trying Hard to Keep Up with iPhone 6 and 6 Plus Demand
Samsung Plans to Launch Apple Pay Competitor in 2015? »

According to the latest statistics from Google, Apple’s iPhone 6 has topped the rating of the most popular and trending tech searches of 2014. Moreover, the long-anticipated Apple Watch has managed to get the eighth spot and the iPad Air - the tenth place of the same rating published by the search giant. 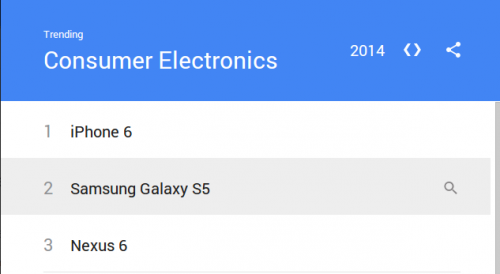 The "Year in Search" feature displays the most popular searches or, in this particular case, it indicates consumer interest in new gadgets. Apart from Apple’s smartphone, tablet and smartwatch, in the Consumer Electronics section of the rating one will find such devices as Samsung Galaxy S5, Nexus 6, Moto G, Samsung Galaxy Note 4, LG G 3, Xbox One and Nokia X.

If to speak about 2013 and the most popular Apple-related searches, they include the following ones: "iPhone 5s", "iOS 7" and "iPad Air". These searches managed to occupy the third, the eleventh and the sixty-eighth place in Google’s annual rating.

As we see, in 2014, more people showed interest in Apples gadgets. And that is definitely a piece of good news for the guys from Cupertino and a motivation to make their smartphones and tablets even better than they are now.

« Apple Trying Hard to Keep Up with iPhone 6 and 6 Plus Demand
Samsung Plans to Launch Apple Pay Competitor in 2015? »