Apple’s business in China is not going well even though the company continues to invest in this market. According to the latest report shared by Bloomberg, the Cupertino tech giant has recently lost more than 1% of the smartphone market share in this country. The iPhone is currently the fifth top-selling smartphone with a share of 10.8%, which is down from 12% in 2015. The first place in the ranking is taken by Huawei, with other members of the top-five list including Vivo, Oppo, and Xiaomi. 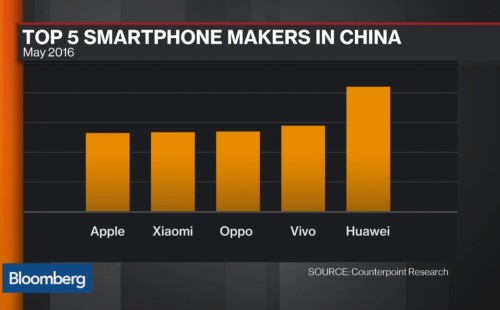 The report found that iPhones made up 10.8% of devices sold in May, down from 12% a year ago. Chinese company Huawei increased its lead with 17.3%. Coming in second is Vivo, followed by Oppo, Xiaomi, then Apple.

China is one of the most promising and profitable markets for Apple, so the company will do its best to overcome all trademark, regulatory and other issues to make its phones and consequently services available to new users in this large Asian country.