11:42AM - So, you guys want me to liveblog the music? It sounds great. Chords. Singing.

11:42AM - Music events come with musicians, and today we’ve got the Foo Fighters. Hello. 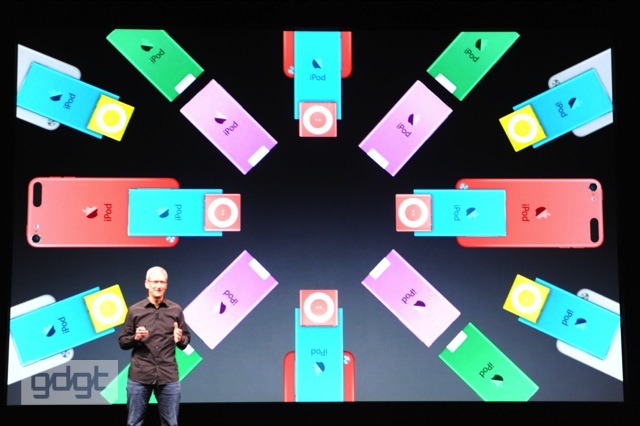 11:36AM - “As you might have guessed, we want to include these with a couple other products.” They’ll be included with the new touch, nano, and iPhone 5. Hot.

"I think music lovers will love these. We're going to start shipping these as a standalone accessory. Available today."

11:34AM - He’s calling it a breakthrough in both comfort and audio quality. We’ll see about that!

11:33AM - Joz is talking about speakers — headphones, specifically. “We’ve spent three years designing new headphones, and we call them EarPods.”

"And for the first time, we're supporting Siri on the new iPod touch."

11:28AM - It’s also getting the new Panorama feature, as you’d expect. iPhoto for iPod touch will be available, too.

11:27AM - Demo over, big applause. Joz is back. “So with all this performance, would we sacrifice battery life? Of course, the answer is no.” 40 hours music, 8 hours video. Not bad.

The character onscreen is reacting to the player's actions. Pretty funny stuff. Now being tickled... and chased. Stuff is getting weird.

11:23AM - A5, as you’d expect, with up to 7x the performance of previous touches. Makes sense, because the touch has kind of lagged behind the curve a bit. 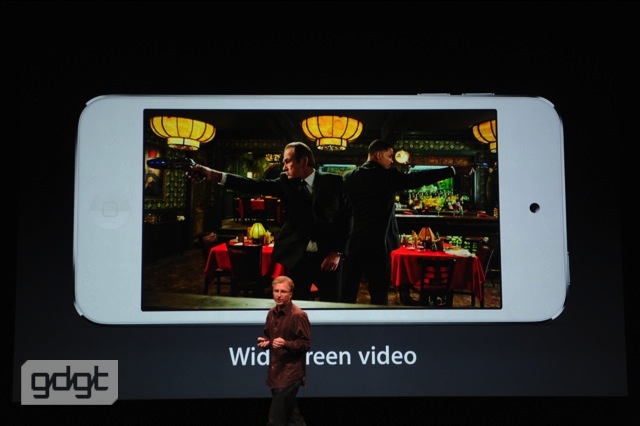 11:22AM - Lightning, speaker, and “exactly the same 4-inch Retina display we have on the iPhone 5.” Good, because iPod touch displays have tended to be significantly worse than their iPhone counterparts.

11:17AM - “It’s incredibly portable and incredibly light. Almost 50% thinner than the nano it replaces.”

11:15AM - “We’re going to make some exciting changes to the lineup today.” iPod nano’s first.

11:15AM - “We’ve sold over 350 million iPods, and we add millions to this every quarter. But we don’t do this just for the numbers, this is part of the DNA of Apple, and we love music.”

11:13AM - New iTunes store look, not all that different from what we’ve got today.

11:06AM - “We now have over 200 million customers using iTunes in the cloud.” Really? That doesn’t sound right, but wow.

11:03AM - “Today I’m happy to report that the iTunes store is available in 63 countries around the world.” Applause. 435 million iTunes accounts with 1-click purchase. Damn.

11:02AM - “We get really excited that make enjoying music even better, or even simpler. Today we’re announcing some exciting changes with both IPod and iTunes.”

10:57AM - Ive: “What makes iPhone 5 so unique is how it feels in your hand. The materials… the remarkable precision. Never before have we built a product with this extraordinarily level of fit and finish.”

10:55AM - Mansfield: “I don’t think the level of invention has ever been matched by any other product we’ve done.” Yeah, but you guys always say that.

10:52AM - Phil’s doing the wrap-up review on the stuff we’ve learned. “It’s THE best phone we’ve ever made.” Video time.

10:52AM - iPhone 5: black and white with a silver aluminum finish. Pretty hot, but that top strip still looks off to me. The camera isn’t quite aligned vertically!

"Now I'd like to show you photo stream sharing. I can just select photos and then say share..." Scott is picking individual people he wants to share with.

"We now have VIPs in mail. They're all collected in one place. It's also easier to flag messages."

10:41AM - Scott’s demoing the new Maps stuff from iOS 6. If you tuned into our WWDC 2012 coverage, you’ve seen this stuff before. It’s impressie.

10:38AM - “We’re working with accessory makers to have them integrate Lightning into their products this holiday season… but what about all the devices you have now that use the 30 pin connector.?”

10:37AM - Connector: “It’s served us well for almost a decade. So much has changed. So many things we used to do over the wire we now do wirelessly.”

10:36AM - Audio system got upgrades, too! Three microphones! Front, back, and bottom. Speakers have five magnet transducers (up from three). Earpiece now includes noise canceling on your own audio out. THAT is awesome.

10:33AM - New feature: panorama! Just hit a button, swipe your phone around. Rad.

10:32AM - These photos are pretty incredible, but they didn’t show much low-light photography.

10:30AM - And it’s better: dynamic low-light mode, up to 2 f-stops greater light performance, five element lens. “The team is now measuring down to the micron level to create better lenses. And for the first time we cap off this camera with sapphire crystal lens cover.”

10:30AM - Next: camera. “If you know anything about camera design, you know the greatest challenge is vertical height. We asked our engineering team to create a thinner camera that’s better than the iPhone 4S, and they’ve done that.” Damn, that’s amazing. 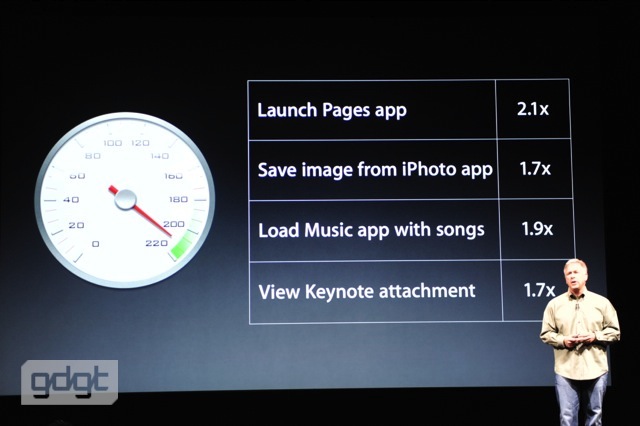 10:21AM - “Ultrafast wireless technology. You can imagine the challenge our team faced: thinner, smaller… but we’ve added HSPA+, DC-HSDPA, and yes, LTE.”

10:20AM - 44% more color saturation: now fully sRGB, “it’s now the most accurate display in the industry.” Touch sensor is built into the display now. Damn. “It’s truly the world’s most advanced display, and we couldn’t be prouder of it.”

10:17AM - Phil’s showing demos of new apps optimized for the wider screen. “All of our software is being updated as well to take advantage of these applications.”

10:15AM - It’s built to the most exacting standards Apple has ever taken on. Thinnest, lightest phone Apple’s ever built.

“It’s a jewel. It’s the most beautiful product we’ve ever made, bar none.”

10:08AM - “We sold more iPads than any PC manufacturer sold of their entire PC line.” What! 84 million total units sold. “This is shocking considering this is a category that didn’t even exist a few years ago.”

10:06AM - “For the last six years the Mac has significantly outgrown the PC!” Duh. “The iPad is driving the post-PC revolution at a breathtaking pace.”

10:05AM - “Onto the Mac. We’ve had a very busy summer.” Mountain Lion: the first with iCloud built right in. Tim’s quoting effusive reviews. 7 million downloads of Mountain Lion.

"We're opening in our 13th country on friday."

10:02AM - Video time, Tim’s gonna show the “energy and enthusiasm of the store’s opening.”

Some epic pop on the sound system.

And we're in our seats. And they are so so comfy.

9:47AM - Ok! Broadcast media is being admitted, which means I’ll be seated within a few minutes!

The doors are closed.Nobody is allowed to get in. 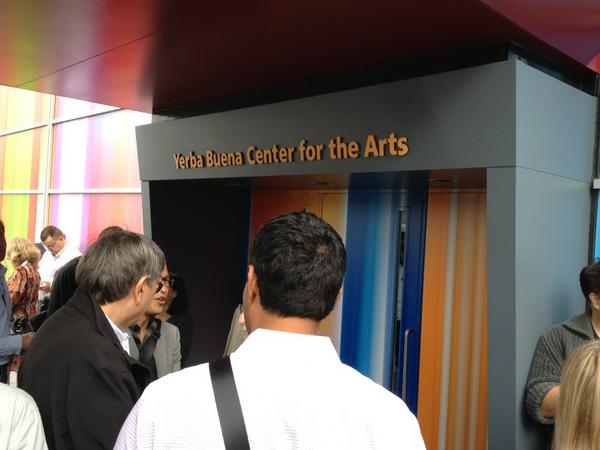 It is getting crowdy. 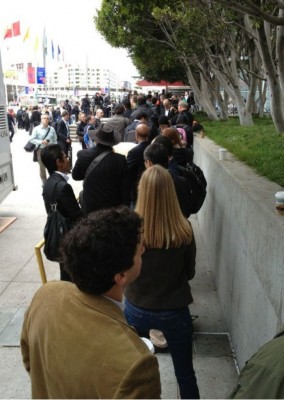 Today we will see new iPhone 5 and new iPod touches and iPod nanos. 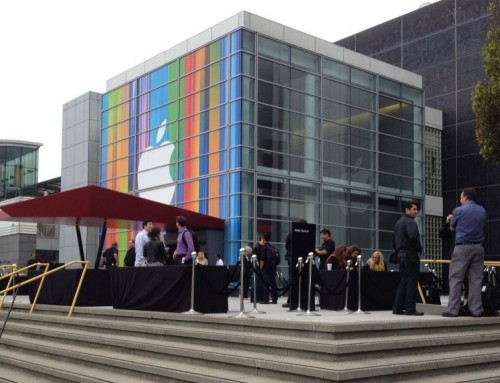 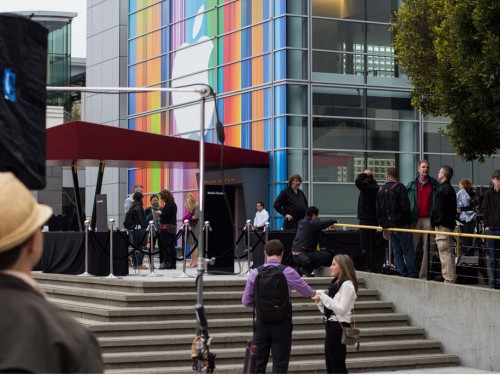 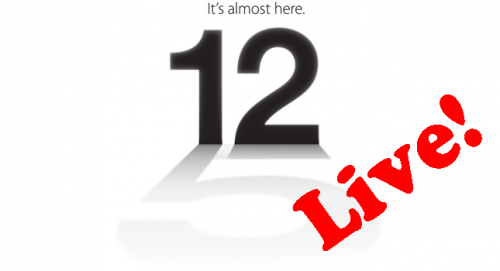 September 12 at 10:00 am PT Apple will introduce the new iPhone 5 (or whatever the new iPhone will be called). New smartphone will it be taller, thinner, unibody case. We'll find out soon enough. We're also hopeful that the iPod lineup will be getting a refresh too, and there'll be plenty of time for other surprises.