Most of the iOS, Android apps send private data to advertisers 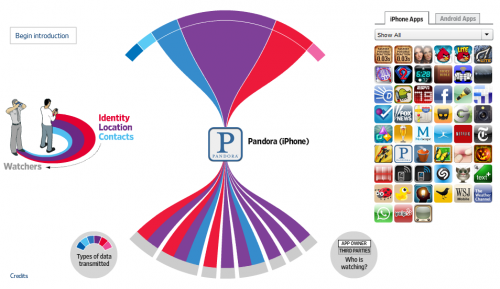 The Wall Street Journal has published another interesting survey of 101 different applications for iOS and Android devices, which were examined to find out what information they send to advertisers. Here are the results:

It wasn't revealed how these 101 apps were chosen and whether they can represent a comparable selection for two platforms, but it was noted that iPhone apps send more data than Android titles.

"In the world of mobile, there is no anonymity. A cellphone is always with us. It's always on."

It is important to note, that user cannot in fact struggle with these circumstances, as there is no access to cookies and no firewall, which is applicable to computers, so sending off personal data to advertisers cannot be turned off. Taking that into account, the handset manufacturers don't pay much attention to privacy policy in order to maximize the income. The advertisers in turn are interested in bringing their ads to the target audience, and the best way to find the latter is to filter users by their demographic data, location and interests.

To avoid the information leak Apple has implemented strict privacy policy in its iOS, so now all the applications are allowed to gain personal data only for showing the relevant advertisements. The users are allowed to forbid sending information about their location. That became a reason for rumors about another way of collecting personal data by Apple, but the company disproved that by an official response:

"Apple does not share any interest-based or location-based information about individual customers, including the zip code calculated by the iAd server, with advertisers. Apple retains a record of each ad sent to a particular device in a separate iAd database, accessible only by Apple, to ensure that customers do not receive overly repetitive and/or duplicative ads for administrative purposes."

Such an approach made it impossible to place ads by third-party advertising agencies like Google's AdMob, which caused Apple to be much criticized.

In regard to the main iOS competitor Android, that operational system doesn't have any restrictions on sending the private user data. Google doesn't also approve apps that appear in the Market. This is made Google's app store full of malware, which is able to collect and delete user data, send spam and bring ads to contacts' e-mails. Moreover, such apps can be available in Market for months and brought to many users before Google will find and delete it.

Anyway, the research made by The Wall Street Journal reveals that app developers found out how to bypass the privacy policy no matter what the platform is, and currently users can do nothing with this fact.

To learn more details on the research visit .