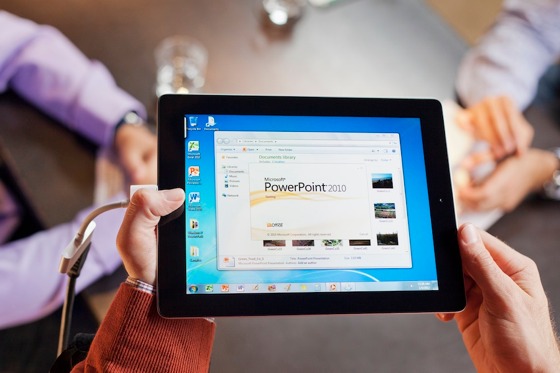 , video game streaming company, has introduced a virtual, streaming Microsoft Windows 7 Desktop app for iPad. The Desktop app, at CES, will finally be available on other platforms including Apple’s Mac. The full-functional versions of Microsoft Excel, Word and PowerPoint will be available to users soon after CloudOn released its Office solution for iPad.

GigaOm that in today’s widespread broadband connectivity Windows programms running on an iPad could potentially work faster than programms running on a standard laptop with Windows 7. Also it reports that OnLive is making the Windows 7 Desktop app available on a freemium basis. Users will get 2GB of cloud storage and access to such applications of Windows 7 as Word, PowerPoint and Excel, as well as other games and utilities. Users can store their documents in the cloud and access them from any device through a web interface.

In the foreseeable future, OnLive plans to release Desktop Pro service that will offer 50 GB of cloud storage, additional apps, priority access and other functionality for $9.99 a month. It also expects to include features for enterprise users such as using virtual whiteboards and sharing documents.
After trying the app at OnLive HQ, The Verge :

"a little bit of perceptible lag, it's pretty impressive manipulating objects with our fingers and flipping through PowerPoint presentations on a desktop miles away".

OnLive has already announced iPhone and iPad support for its gaming services, although these apps have yet to be released to the public.

The app will be available in the U.S. this Thursday and "soon" in the UK. OnLive Desktop app for the iPad will be free of charge on the App Store.