Winterboard Has been Updated Recently

Winterboard has been recently updated to work properly on all 64-bit Apple devices running iOS 7 such as iPhone 5s, iPad Air and iPad mini with Retina display. What that means is there should be no bugs now, so all those people who like to customize and change the default Apple themes and wallpapers can at last sigh with relief. Well, at least we hope for that. 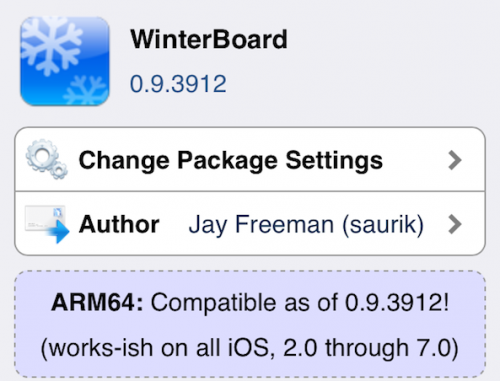 According to iDownloadBlog, however:

Saurik notes that Winterboard version 0.9.3912 “seems” compatible with 64-bit devices. Judging by his careful choice of words, it appears that Winterboard might still be needing some work to squash bugs that could have gone unnoticed during development.

Well, even if there’re some bugs left now, I think that all of them will be fixed soon and Winterboard will be fully operational on iOS 7.