According to the latest report released by a research firm Consumer Intelligence Research Partners (CIRP), Apple managed to get 50% of the smartphone sales in the USA in the calendar quarter ending in December. In other words, half of the handsets sold on the territory of the United States over the last few months are Apple's iPhones. 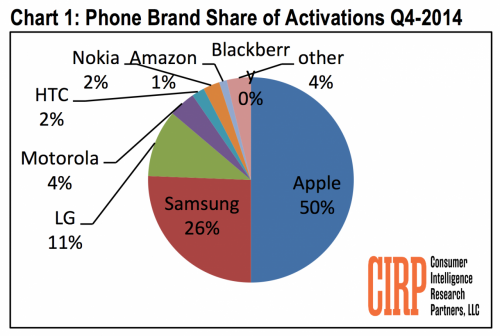 There are two reasons to such strong sales. The first one is the 4.7-inch iPhone 6 and the second one is, as you might have guessed, the 5.5-inch iPhone 6 Plus. It is no secret that both smartphones are incredibly popular among the American customers as well as among those people who live in Europe and Asia.

Here's what Josh Lowitz, one of CIRP founders, says about Apple's sales results in the last calendar quarter:

Apple had virtually double the sales of Samsung, and five times that of LG. No other brand accounted for as much as 5% of US sales. The Amazon Fire and Blackberry smartphones registered slight share, which we attribute to random sample fluctuation as much as actual sales.

As noted in the same report, 86% of iPhone 6 or 6 Plus customers were former iPhone users. Such a figure proves that most of the Apple fans remain loyal to the brand.