« 15-inch Broadwell MacBook Pro: To Be or Not to Be?
Labor Shortages Reportedly Caused Slow Apple Watch Launch »

Apple Watch Can't Be Locked After Being Lost or Stolen

According to the latest report from people familiar with the matter, the Apple Watch can soon become a potential target for thieves. You see, there’s no such feature as Activation Lock embedded to the wearable device. In case you don’t know, this security feature makes it impossible for thieves to use the iPhone, iPad or iPod touch with a new account. 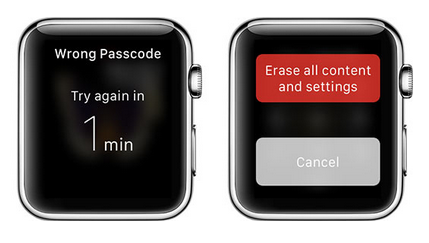 The lack of Activation Lock allows thieves to bypass the passcode by resetting the Apple Watch. After doing this, they can easily add a new user account and pair the gadget with a new iPhone. Another thing is that because the Apple Watch needs to be paired with the iPhone to be fully functional, there’s no Find My iPhone feature for this device as well. Looks like Apple has forgotten about the security of its smartwatch.

As pointed out by iDownloadBlog in a detailed post on the security of the Apple Watch, there is nothing that stops a lost or stolen Apple Watch from being wiped and paired with a new iPhone. The Apple Watch has a passcode option that requires a sequence of numbers to be entered every time it's removed from a wrist, but the passcode protects only data.

The passcode is also easily bypassed with a reset.

Apple hasn’t yet commented on this serious security flaw of the Apple Watch. Still, I believe that in future, the guys from Cupertino will release an update for its Watch OS and come up with a solution to the aforementioned problem.

« 15-inch Broadwell MacBook Pro: To Be or Not to Be?
Labor Shortages Reportedly Caused Slow Apple Watch Launch »