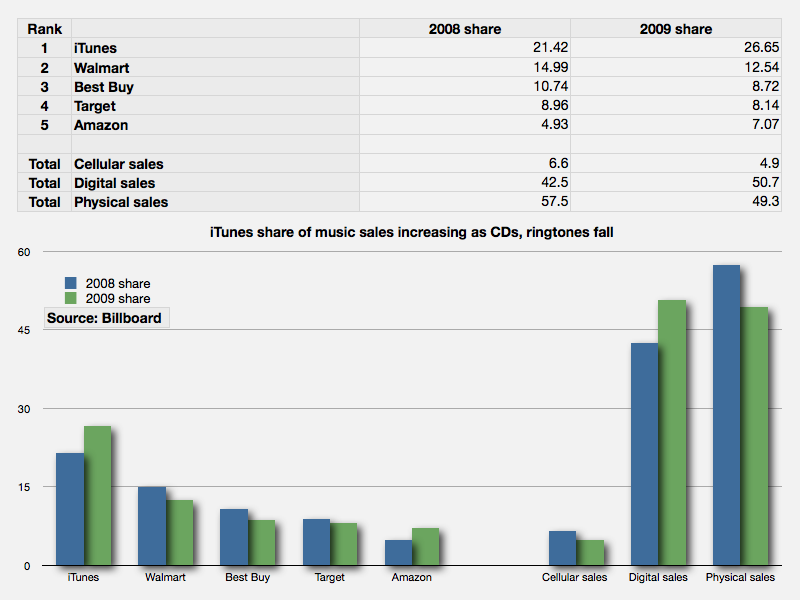 Recently Billboard published a report that reveals new information on Apple's share on music sales market. When the first generation iPhone was presented, iTunes had only 12,7% of American music market. In 2008 Apple almost doubled it and made 21,4%. 2009 reveals five percentage points increase - now iTunes has 26,7% of music sales.

Such mobile providers as AT&T, T-Mobile, Sprint, and Verizon Wireless on the contrary lose their positions, downing from 6,6% to 4,9% in 2009. Partly it is explained by lower priced ringtones in iTunes and its free tools for making custom ringtones. Both of these factors eventually attracted more people.

Physical media music in turn loses its popularity from year to year. Numbers reveal its share fell from 57,5% in 2008 to 49,3% in 2009. That means that iTunes actually makes a half of all digital music downloads overall.

iTunes' closest rival Amazon also increased its sales. But in digital MP3 sales the company's share grew from 0,8% in 2008 to 1,3% in 2009, which is not even close to Apple's 26,7% share. Such results, according to Billboard, were "still well short of where major labels had hoped Amazon's download store would be by now, dimming earlier expectations that it will be able to significantly reduce the labels' heavy dependence on iTunes for digital sales."

It is interesting to look forward for Google which recently acquired Simplify Media to expectedly turn it into iTunes rival for Android users. But for now the company's subsidiary AdMob reveals the amount of media bought or even downloaded by Android users is still so small that it cannot be compared with iTunes success.