11:23AM - “Across the year you’re going to see a lot more of this kind of innovation, we are just getting started.”

11:23AM - Tim: “It’s the privilege of a lifetime for me to work with the most innovative people on Earth. Only Apple can deliver this kind of innovation in such a beautiful, integrated, and easy to use way. It’s what we love to do, it’s what we stand for.”

11:22AM - Ad: When a screen becomes this good, colors become more vibrant, words are pin-sharp, everything is more brilliant.

11:21AM - “We have redefined once again the category that Apple created just two years ago with the original iPad. We are so proud of this product that we’ve prepared an ad, I’d love to play it for you.” 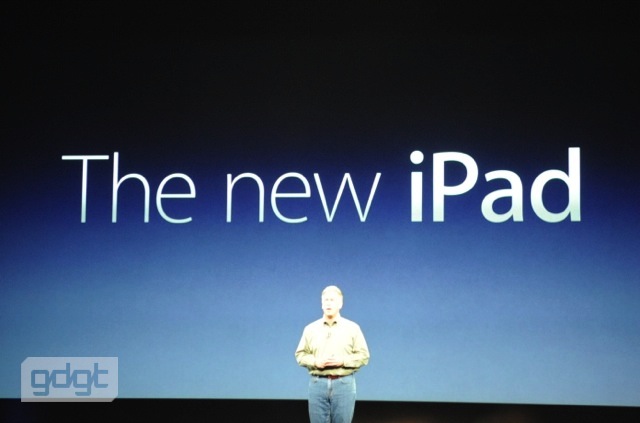 11:20AM - “There really is something for everyone at everyone. I’d like to turn it back to Tim.” Tim’s back, applause.

11:20AM - “This is really huge — so many more people can afford to get into this groundbreaking technology. This is a really big deal.”

11:16AM - Apple is claiming a major breakthrough in the iPad’s Retina Display, lifted the pixels out of the signal paths so there’s no interference in communication.

11:14AM - “So if you can’t tell by now we absolutely love the new iPad and the software it runs. When we absolutely love a new product, we create a video for it.” Video time! And it sounds like it’s narrated by Tom Cruise. Bokay.

11:12AM - Publishes to iCloud! Outputs a link for sharing. Sounds kind of like .Mac. Remember .Mac?

11:12AM - Insert various elements in to photo journals: maps, dates, notes, even weather (which pulls the date and location and pulls in the archived weather data).

11:08AM - Showing image color rebalancing, brush palettes — rub over the image to make changes. I can’t wait to try this.

11:04AM - Does multi-photo comparisons — works with images up to 19 megapixels. Pretty crazy.

11:02AM - Demo time! Randy Ubillos, who we know as the dude who reinvented iMovie (a couple times).

11:01AM - It’s all about photo editing — effects, editing, photo-beaming (from device to device), and new photo journals.

10:58AM - “For the first time you can do outlining and storyboarding, then record in 1080p, and play it back all on the same device.” 10:57AM - showing some updates to Garage Band, which is available today. 10:53AM - “This new device has more memory and higher screen resolution than an Xbox 360 or PS3.” Hmm, interesting way of looking at it. 10:51AM - Dungeons: craft the Infinity Blade. Looks a lot like Diablo.

10:49AM - Phil: “For our third and last demo: Epic games. They’ve pushed the boundaries of what anyone thought was possible on a mobile device.” Mike Capps is up.

10:45AM - Phil’s back. “It’s absolutely incredible to see that level of gaming on a device you can carry around with you. Next up: Autodesk.”

10:42AM - “As you’ll remember, when the iPhone 4 went to the Retina Display developers didn’t have to do anything to make their applications run on the Retina Display. Everything will still look great, but if developers take a little time, as with the iPhone, they can do stuff that looks amazing and incredible on the new iPad.”

10:38AM - “You may be thinking, a lot of these technologies consume a fair amount of power. So how does it do on battery life? You may recall we claim 10 hours of battery life, and 9 hours on 3G.”

10:38AM - “This new iPad has the most wireless bands of any device that’s ever shipped.” You know, I believe that claim. Pretty crazy stuff.

10:36AM - “As you remember, when 3G started showing up there were many different bands. The same thing is happening on LTE with many bands around the world. We’ll have two versions in the US.”

10:35AM - Showing video loading — LTE is loading faster than it can be viewed, but still buffering on 3G.

10:32AM - “The new iPad supports English, French, German, and of course now, Japanese.”

10:32AM - “Of course, we have our great software keyboard. We have a new key on the bottom — just tap it, speak into your iPad, and it’ll dictate what you have to say.”

10:31AM - “It is perfect to watch these videos back on this gorgeous large Retina Display. Fourth feature: voice dictation.”

10:29AM - Auto-exposure, auto-focus, auto-face detection, great edge-to-edge detail, AF-lock, “It is just a blast to use.”

10:28AM - “Second feature: an iSight camera. As you know, on the front of our iPad we have a FaceTime camera. The new iPad has a great rear iSight camera — we brought the optics system from the iPhone 4S…”

10:28AM - “This is the best mobile display that has ever shipped, and it’s a real revolution. That’s the first feature.” Big applause. Okay, you win, Apple.

10:27AM - “We needed even more horsepower for the new iPad and its Retina Display, so we created the A5X chip. What’s the x for? Quad-core graphics.”

10:26AM - “Now, there’s four times the pixels on the new iPad display, and we need a lot of horsepower.”

10:24AM - “When you turn on that new iPad you’re going to see graphics, text, icons sharper than you can imagine. Everything you do is going to look stunning.”

10:23AM - “To this day no one has yet matched that display technology on any mobile device. We’re going to bring it to the 9.7 inch screen of the iPad. This presents a problem for us though… for the first time an iPad has a higher resolution than even the display behind me.”

“To this day no one has yet matched that display technology on any mobile device. We’re going to bring it to the 9.7 inch screen of the iPad. This presents a problem for us though… for the first time an iPad has a higher resolution than even the display behind me.” “Until you see it you can’t understand how amazing it is.”

“It is amazing. We’ve taken it to a whole new level, and we are redefining the category that Apple created with the original iPad.”

“We said that in order to do that, the iPad had to be the best device for doing the things you do most often, like browsing the web and checking email. This is a tall order, but when we asked iPad users, they told us this is exactly what we’d done.” Okay, time to talk iPad...
"We think that iPad is the poster child of the post-PC world."

"The momentum behind iPad has been incredible and it has surprised virtually everyone." 15.4 million sold in the last quarter.

“The new Apple TV retains the same very low price of $99 and it’s available next week. Get your orders in starting today, and I’d encourage you to do that.”

He's looking through movies, including Senna, which hopefully we won't be watching now. Don't need​ to be getting misty-eyed.

It also recommends movies for you based on what you've seen. A long-press of Menu brings you back to ​the home, short tap to bring a pop-up menu.

Cue showing off the Photostream feature from iCloud. Fullscreen 1080p photos on your TV --up from 720p previously.

Eddy Cue, Apple SVP up on stage now, giving us a demo of the new hardware. Very app-style looking experience. Instead of the side to side style UI, it's now a big bunch of app-style icons. “In just a few months we’ve gotten to over 100 million customers on iCloud. Part of iCloud is iTunes in the cloud. Today we’re announcing that it now supports movies.”

“We’re also announcing that movies and TV shows in the iTunes store support 1080p HD. They are absolutely incredible quality.” 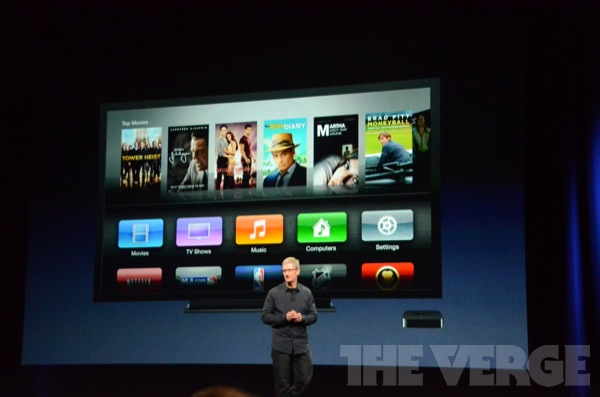 Part of iOS 5.1 available today, rolling out to Japan "over the next few weeks."
Now talking about the App Store. 585,000 apps currently in there!
"Great apps lead to more downloads, which leads to more great apps, which leads to more downloads."
It's a wonderful, hugely profitable cycle.
25 billion apps downloaded! 25 billionth was downloaded in China. “Siri is your best friend, your intelligent personal assistant who gets things done just by asking. It’s a whole new way of interfacing with your phone, and our customers tell us that they love it.”

"Pretty cool isn't it?"
"Now another key to our post PC success is iOS. The world's most advanced operating system and the easiest to use. iPhone, iPad, and iPod touch are all based on it."
"We sold 62m of those devices just last quarter."
"One of our favorite new features of iOS is Siri."

"We were so excited about the opening of this store that we prepared video."

"Towards the end of last year we opened a new store in the historic Grand Central Station. The turnout for the opening was off the charts.” "Apple has its feet firmly planted in the post-PC future."
"It plays to our strengths. It's what we love to do."

“The revolutionary device that defined a whole new category. In many ways iPad reinvented portable computing.”
“Any company would be thrilled to have just one of these devices. At Apple we’re fortunate to have all three, and the momentum has been staggering.”
76% of Apple’s revenues in these three product lines. “Apple has its feet firmly planted in the post-PC future.” "Morning. Thank you very much for joining us. We have a great morning planned."
"I'm excited to be here. I'd like to get started by talking about the post PC revolution. And Apple is at the forefront. Leading this revolution."
"We're talking about a world where the PC is no longer the center of your digital world."
"A world where the devices you use the most need to be more personal and more portable than any PC has ever been."
"We have 3 post PC products. The iPod... the iPhone, and the iPad." 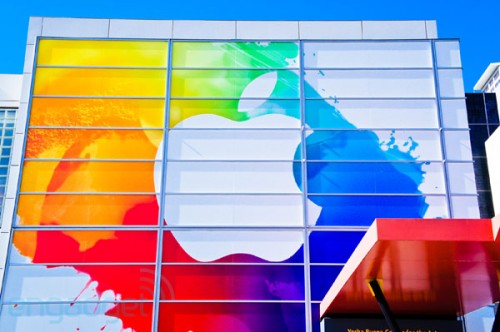 March 7, 2012. Today Apple will present new generation iPad (iPad 3, iPad HD or maybe iPad 2S). The presentation will be by Tim Cook at the Yerba Buena Center for the Arts in San Francisco, California.

We will be here live to bring you the goods as they're unwrapped. We will start at 9:45 Pacific Time.