"These amazing products are great examples of the type of innovation that only Apple can deliver."

New full-wrap case in colors for $79.

Up to 4x faster on CPU, 8x faster graphics.

Available in silver and white, space gray and black.

Phil coming back to introduce the next generation of iPad.

Tim is back. "We know this is just the beginning for iPad."

Over 475,000 iPad apps. "These are custom-designed for iPad, not the stretched smartphone apps that our competitors are doing."

"Regardless of what you might hear or read about how many other tablets are bought or sold or activated, iPad is used more... more than 4 times more than all the others put together."

"Our most advanced technology in a revolutionary and magical device."

Tim Cook back on stage.

"Now you can create a document on an iPad, edit it on a Mac, and even share it with a friend who's stuck on a PC."

Now on to iWork. New icons here as well.

New iLife is free with any new Mac or iOS device.

New feature called Drummer that virtually plays along with your songs, but you can direct it.

All new Garageband for iOS 7. 32 tracks on an iPhone or iPad.

iLife update — new iMovie, iPhoto and Garageband for iOS and the Mac.

Apple's given out some new Mac Pros to people to see — Phil has a few stories.

Up to 1TB of user-accessible Flash storage.

Major updates to both 13 and 15-inch Retina Pros.

And now Phil Schiller to talk about the MacBook. Haswell time?

Maps app, which looks a lot like Maps on iOS.
A notification has come in from "Hair Force Two," Craig's wife. (Craig's nickname is famously Hair Force One.)

Going through iBooks, looking at a textbook about Mars while writing a document in Pages.
Demo time!

Integrated graphics now support OpenCL, so you can run tasks up to 1.8x faster.

Up to an hour longer web browsing and 90 minutes longer watching iTunes video using Mavericks on the latest MacBook Air.

Craig Federighi on stage.
Starting with OS X — this will be a Mavericks overview.
On to the Mac. "Amazing lineup of desktops and notebooks."

Over a million apps in the App Store, over 60 billion downloads. Developers have now earned over 13 billion dollars.

Over 20m listeners have listened to a billion songs in the US in the last month.

"Customers agree, they love the bold new redesign." 5 days after launch, 200 million devices were running iOS 7. Nearly two thirds of devices now running iOS 7. "This blows away the other guys."

Tim is back. "Both new iPhone shipped with iOS 7, the biggest change to iPhone since the original iPhone."

Video of a retail store at launch

9 million iPhones sold at the end of the first weekend, biggest iPhone launch ever.

TIm Cook is out on stage

Video time. "If everyone is busy making everything, how can anyone perfect anything?"

Lights going down a hair — we're getting ready to start.

Apple's iPad event is happening on Tuesday, October 22nd, and we will be bringing you minute-by-minute coverage of the company's latest announcements live from San Francisco. Apple is reportedly preparing to unveil both a new, slimmer iPad 5 and a second-generation iPad mini featuring a high-resolution Retina display. Apple may not stop there: a release date for OS X Mavericks, more details on its Mac Pro desktop, new iPods, Apple TV, iOS 7 and other surprises could also be on the agenda. 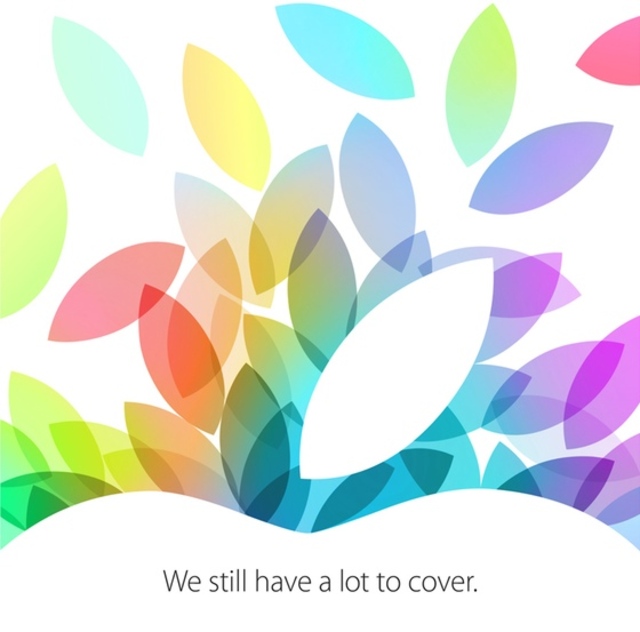